Remember back in February when I flew to Vermont to film the DIY Holiday Special and we got trapped in the 2nd worst blizzard in their history? Well guess what it is about to be on your TV starting this weekend! For your Thanksgiving weekend viewing pleasure, DIY’s Holiday Gift-nanza— featuring Michele Beschen (B.Original), Sandi Genovese (DIY Scrapbooking), Cathy Filian and Steve Piacenza (Creative Juice), Jennifer Perkins (Craft Lab) and Vickie Howell (Knitty Gritty)–premieres this Saturday at 9pmET/8pmCT/6p,PT then shows again 9 different times through the holidays. Poor Allison Whitlock of Uncommon Threads was suppossed to be on the show, but she could not get to Vermont because of the storm. She flew all the way from Australia and made it as far as DC. The important thing is that the producers already had her crocheted earrings on set because they were for me 🙂

Vickie and I shooting an outdoors scene. 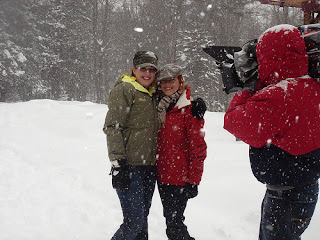 Cathie, Vickie and I outside of the Vermont set.
(Before we found out that the entire cast and crew were snowed in for the night) 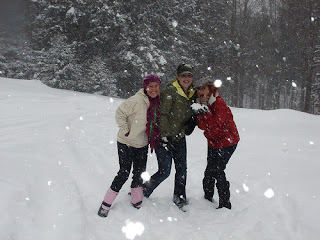 I am particularly fond of this Christmas special because I got to make jewelry! We do a secret Santa type swap where hijincks ensue and I won’t spoil the surprise and tell you who ends up with my jewelry, but I will say that it was hard for me to part with it. I made this crazy chunky necklace and bracelet using my friend Traci Bautista’s graffiti style paper, Aleene’s Decoupage, some rad clip art of ladies in big hats and more. I really wanted to keep it for myself, but that is not very Christmas of me so I gave it away as planned. Check out the DIY Network website for instructions or just read on for a how to guide….

Steps:
Spray paint the discs green on both sides and allow to dry.

Cut circles out from the graffiti paper, slightly smaller than the discs, and use a punch to cut out the cameos. Cameos need to be printed with a laser jet printer so they won’t smear.

Apply decoupage to the discs and then top with the graffiti paper and cover with more decoupage. Allow one side to dry to tacky and repeat for the other side.

Repeat the above process with the cameo paper. Allow to dry overnight.

Apply Diamond Glaze onto each side of the cameo charms. Allow each side to dry.

Once the charms are dry, drill a small hole at the top of the charm.

Cut the gold chain to the proper length and alternate beads on the necklace, leaving a space for them to hang.

Attach the clasp to the chain. The project is super similar to the Dutch Treat Necklace I did in the current issue of Make It Mine Magazine and the Twinkle Charm Bracelet I did for the Michael’s Holiday Ad. Apparently I was on a decopauge kick this year, what can I say. That is why I sell the Crafty Collage Curios Packs on Etsy so you can use the pictures for jewelry! If you give it a go and make your own version I would love love love to see what you come up with. Here are some pictures of other pieces of decopauge jewelry I have made for some more inspiration.

3 Responses to “Learn how to Make Decoupage Jewelry with Me on the DIY Holiday Special.”