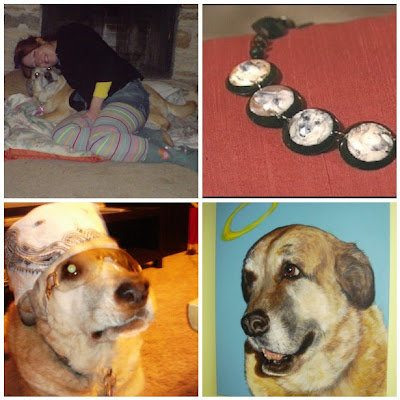 This January we lost our dog Lucy to old age.  We had Lucy for almost 10 years after we found her late one night on the side of the road in Corpus Christie.  We tried taking her to the pound when we found her and they were full.  We went door to door and the only thing anyone knew was that lot’s of people dropped dogs off in the area where we found her.  We put an ad in the paper and no one claimed her.  It was a sign that Lucy was meant to be our dog.  We were so sad when she passed away, but I was so happy that I thought of a crafty way to immortalize her. 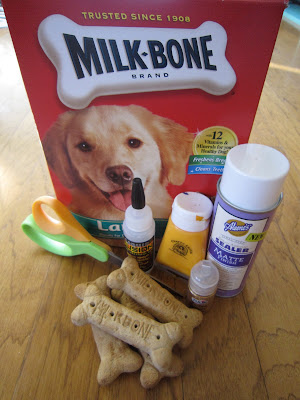 I wanted to make a very special picture frame for Lucy.  Not one that would just sit on a shelf in my own house, one that would be in public for others to enjoy and bask in Lucy’s glory!  We have a local chain of restaurants here in Austin called Chuy’s.  The location closest to our house has a deal that if you bring them a framed picture of your dog not only will they hang it up you also get a free bowl of queso!  It was a win win situation. 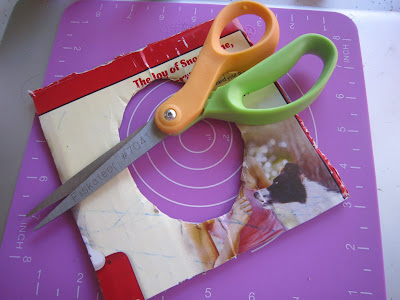 This is far from the first time Lucy has been in the crafty spotlight.  She was the star of my first TV craft project on Crafters Coast to Coast when I made a resin necklace with her picture.  Later she appeared on episodes of Craft Lab when I made poppets with Claudine Hellmuth.  She has even acted as a model for a few craft projects on the blog like New Years Eve Tiaras.
The first thing I did was cut the base of my frame out of a piece of cardboard.  It was an empty Milk Bone Box actually. 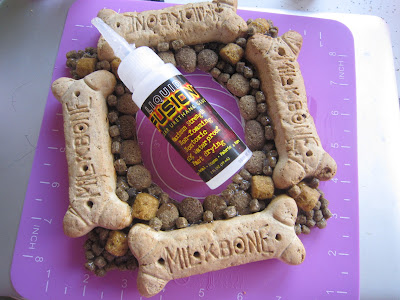 After the base of the frame was made I covered it with Milk Bones and Dog Food.  I threw in a little cat food too since it was smaller and filled in some of the smaller spaces nicely.  I used Liquid Fusion Glue to hold everything in place. 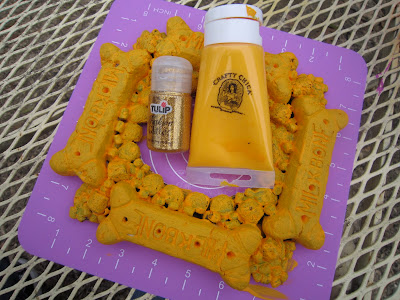 When all the glue had dried i painted all the food with Crafty Chica paint.  It took a few coats to get the golden sheen I was hoping for.  This also helped seal in the smell. 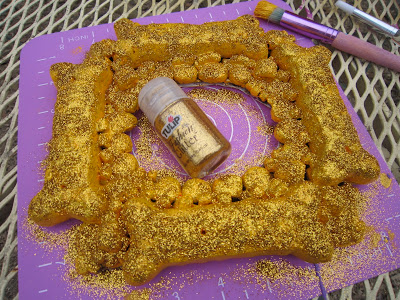 While my second coat of paint was still wet I added a thick coat of Tulip Glitter in gold.
When the frame was a glittery as I wanted I coated the whole thing with some Aleene’s Sealer.  Not only did I not want any glitter falling off I also didn’t want my frame to smell like dog food since it was going to be hanging in a restaurant. When I was finished decorating the frame I printed out a portrait of Lucy we had done years ago.  The artist added a halo to the portrait apporiatly enough.  I glued a print out of the picture into the frame and then added a card board backing. All that was left to do was hang the picture at Chuy’s and score my free queso.  Lucy had been my right hand crafting dog for almost 10 years it was only right that she have one last glittery crafty send off.  If you ever visit the Chuy’s at Arbor Trails look for Lucy.  Every Chuy’s location has an Elvis shrine, but this is the only one with a Lucy shrine.
Love crafty picture frames – check out my posts on Kitschy Up-cycled Frames, Terrarium Picture Frame, Cafeteria Tray Picture Frames, Converting Old TV’s into Picture Frames, Wee Witch Shrine & even more Kitschy Up-cycled Frames.
Share
Tweet
Pin
0 Shares

5 Responses to “I Love to Create – Milk Bone Memorial Frame”