Sometimes you thrift the most perfect Kitschmas ornament.  You know in your heart once upon a time there was an entire set of them to adorn an entire tree, but alas you just found one.  It’s time’s like these you need to take crafty matters into your own hands and whip out a batch of your own DIY pompom Santa ornaments. 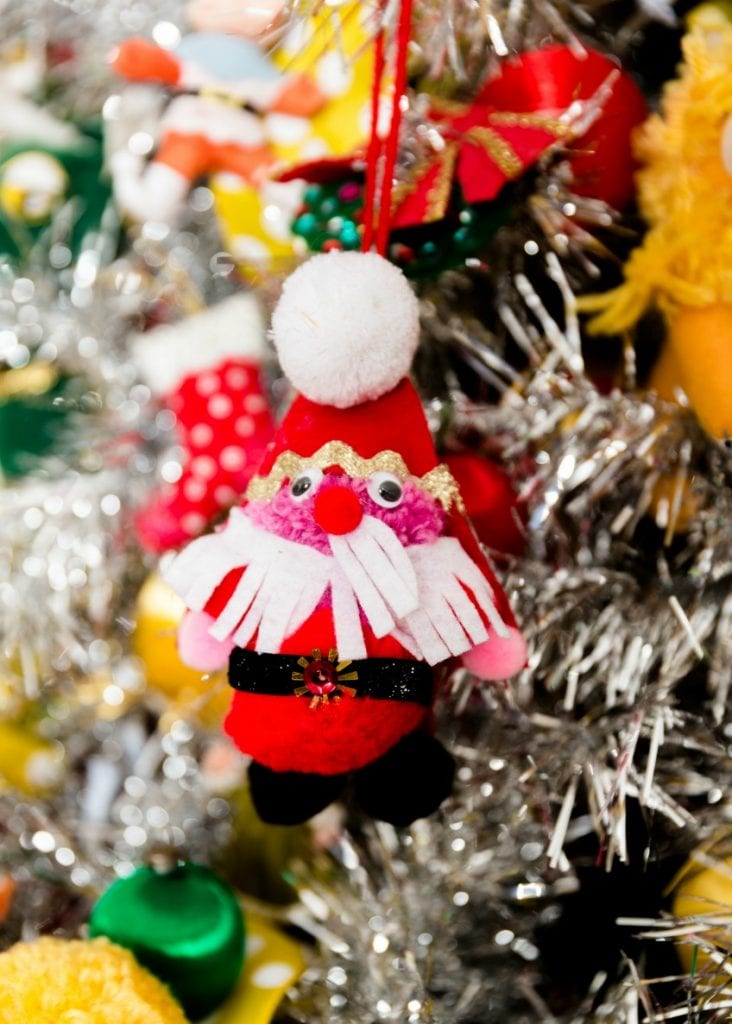 How to Make a DIY Pompom Santa Ornament

Well first of all you study the OG to see how it was made.  My guess is the original Santa ornament (not pictured here) was a project from one of those craft pamphlets all about pompom crafts.  From what I could gleam it was nothing more than some felt and strategic pompom placement standing between me and my army of Kitschmas Santa dreams.

P.S. Pompoms – How cute are these yarn pompom Christmas trees! 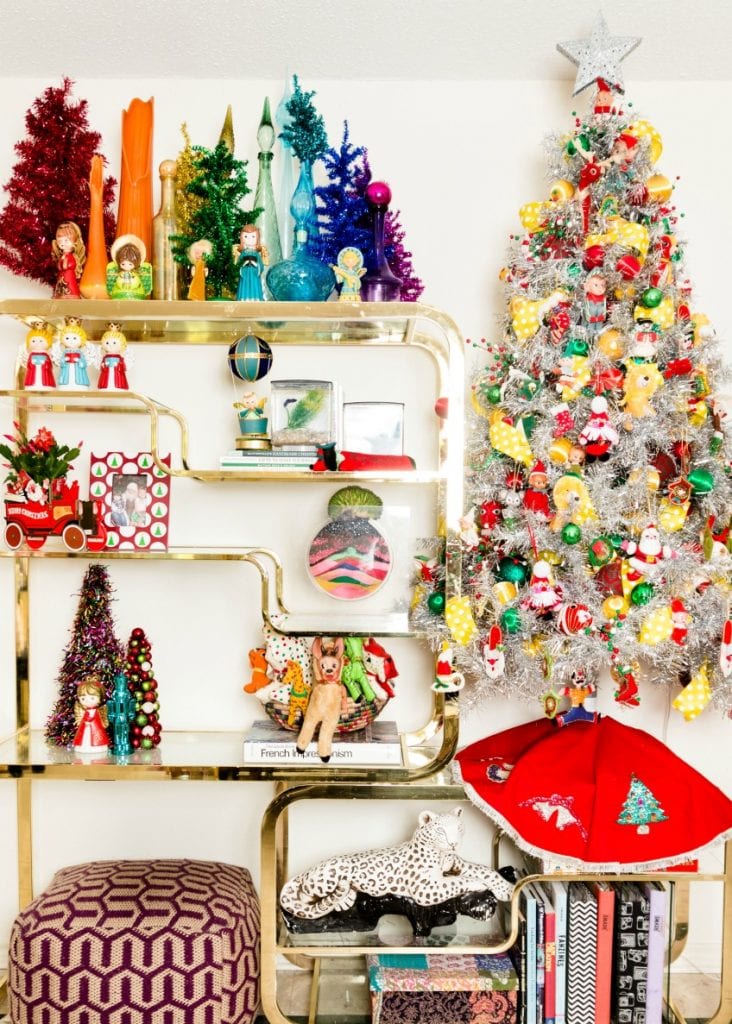 These DIY pompom Santa ornaments are like a little black dress and look great on your aluminum Kitschmas tree, nestled on a holiday wreath or hanging out on a pink Christmas garland.  Trust me I know.

Are you ready to make your own?  Sure you are!

P.S. Pompoms – What about a pompom rug?  This pompom pumpkin rug is for Halloween, but what about a Christmas version! 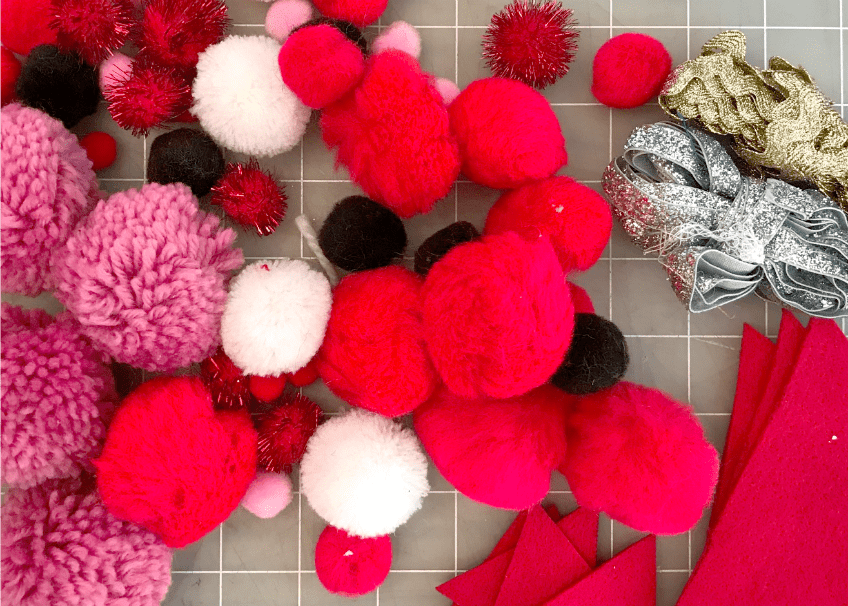 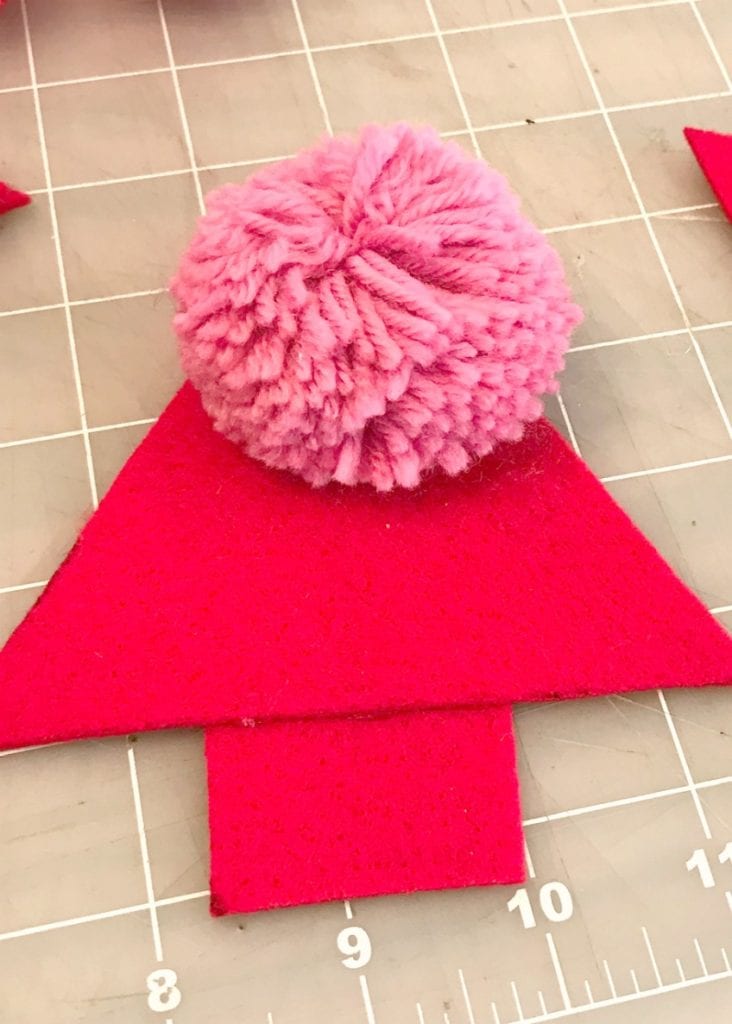 Step 1 – Make a Felt Background for the Ornaments

The key is the felt backdrop.  This will determine the size of your ornament as well as the size of the pompoms you will need to use.

There are three pieces of red felt involved.  The triangular background.  A smaller triangle that will act as the Santa hat.  A rectangular piece for Santa’s black pompom boots. 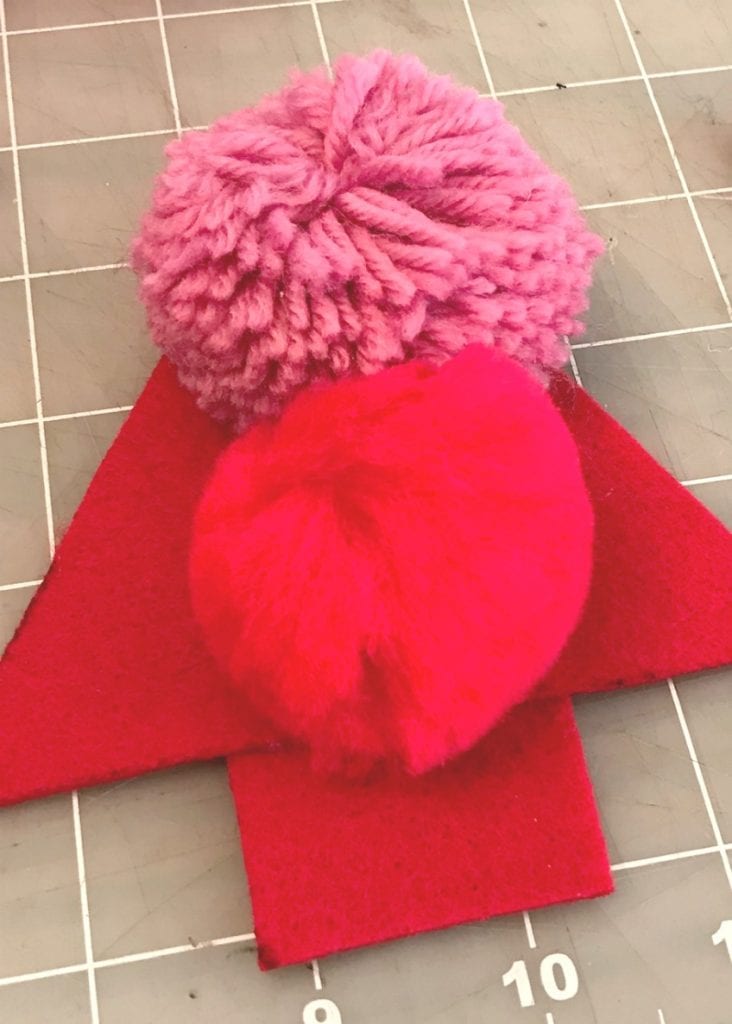 Step 2 – Give Santa a PomPom Body

A pink pompom is used for Santa’s face.  Attach to the top of the red felt triangle with glue.  Below the pink pompom add a second large red pompom to act as Santa’s body.

P.S. Pompoms – Want to know how to make pompoms in bulk?  Who doesn’t? 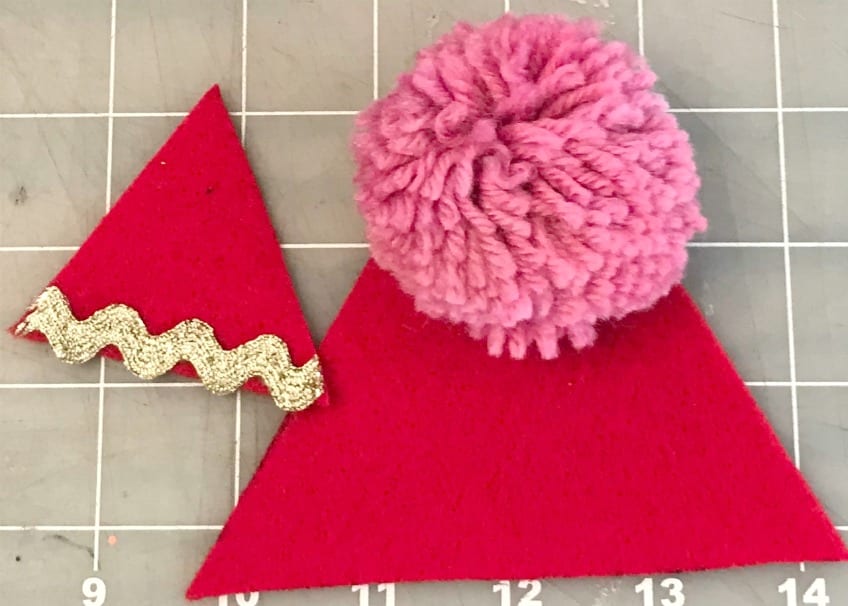 Step 3 – Become The Milliner of the North Pole

Time to make Santa’s hat.  Everyone needs a bit of bling, including Santa.  Go head and bust out the gold ricrac.  Santa is worth it.

P.S. Pompoms – Did you know there was such a thing as pompom yarn?  Like already pre-pommed?  I know my mind was blown too.  Check out this plain wicker beach bag makeover and painted holiday garland. 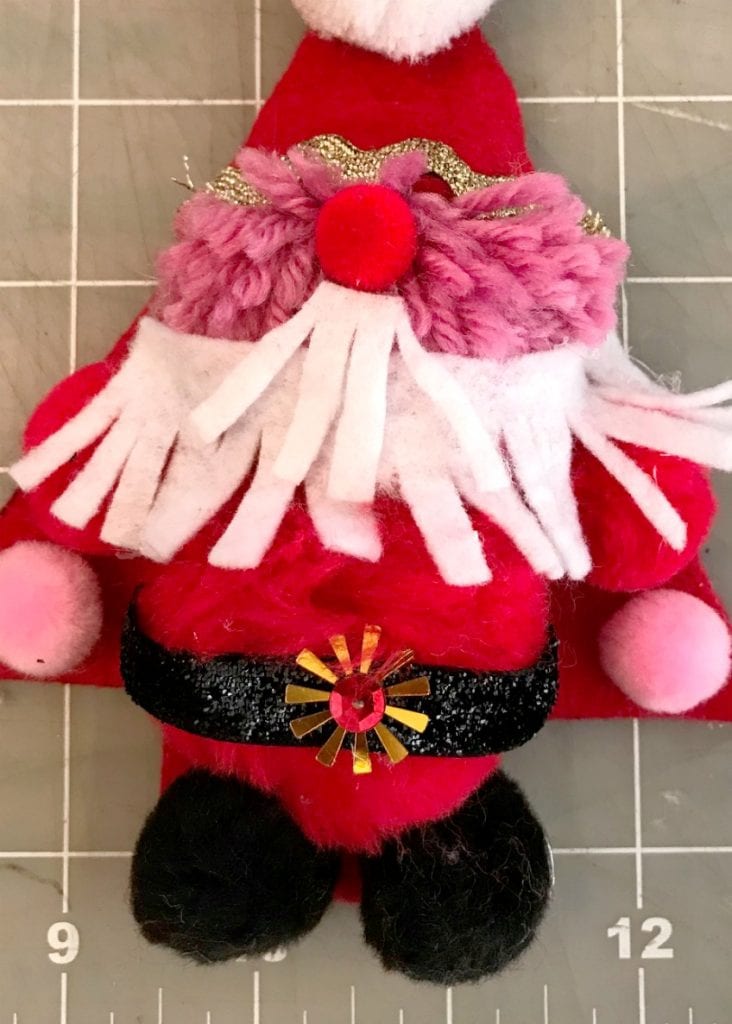 Step 4 – Assembly and Accessories for Your Santa Ornament

Use the rest of the pompoms and glue to assemble Santa.  White felt is trimmed and added to look like a beard.  Don’t forget the ribbon and sequin belt.  Ohh and googley eyes are always a good idea.  Really this is your kitschy Santa ornament, dress him up however your little crafty heart desires.

P.S. Pompoms – Have you ever seen my favorite pompom wreath of all time?  It’s quite a thing to behold if I do say so myself. 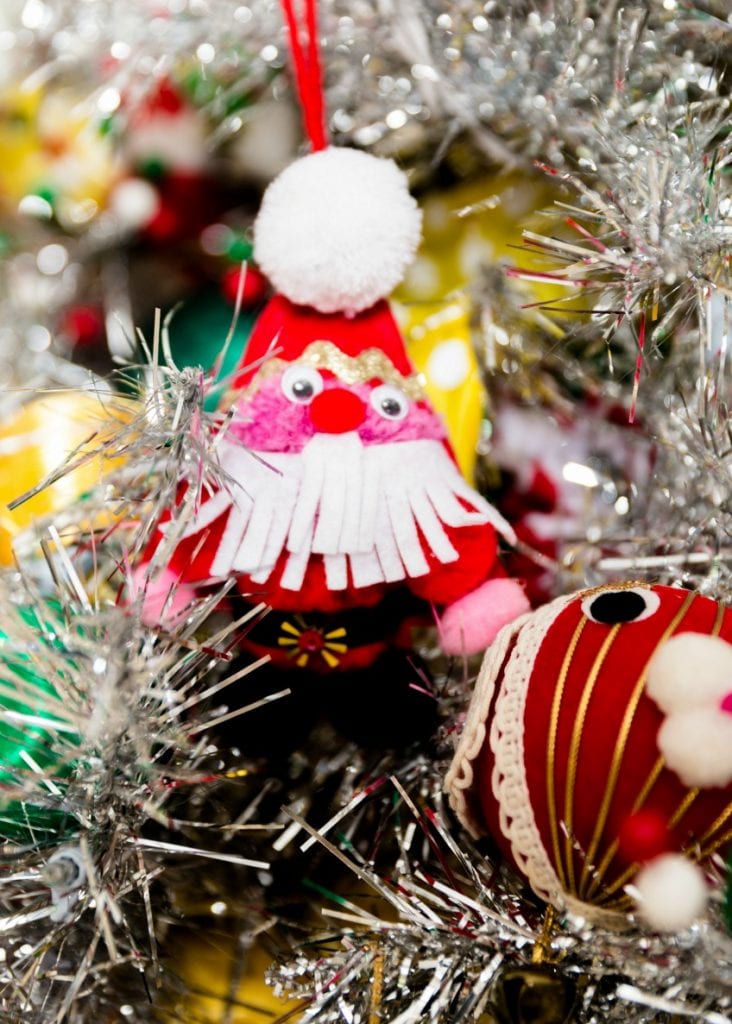 I told you he was a cutie.  Googley eyes optional, but as always highly suggested because ya know it ups the Kitschmas factor greatly.  I’m seriously thinking about making a giant version of this guy as a wreath.  Ya know with some of those pompoms made from an entire ball of yarn!

P.S. Pompoms – Want to know how to make a jumbo pompom from an entire ball of yarn?  In case you want to make a wreath version too. 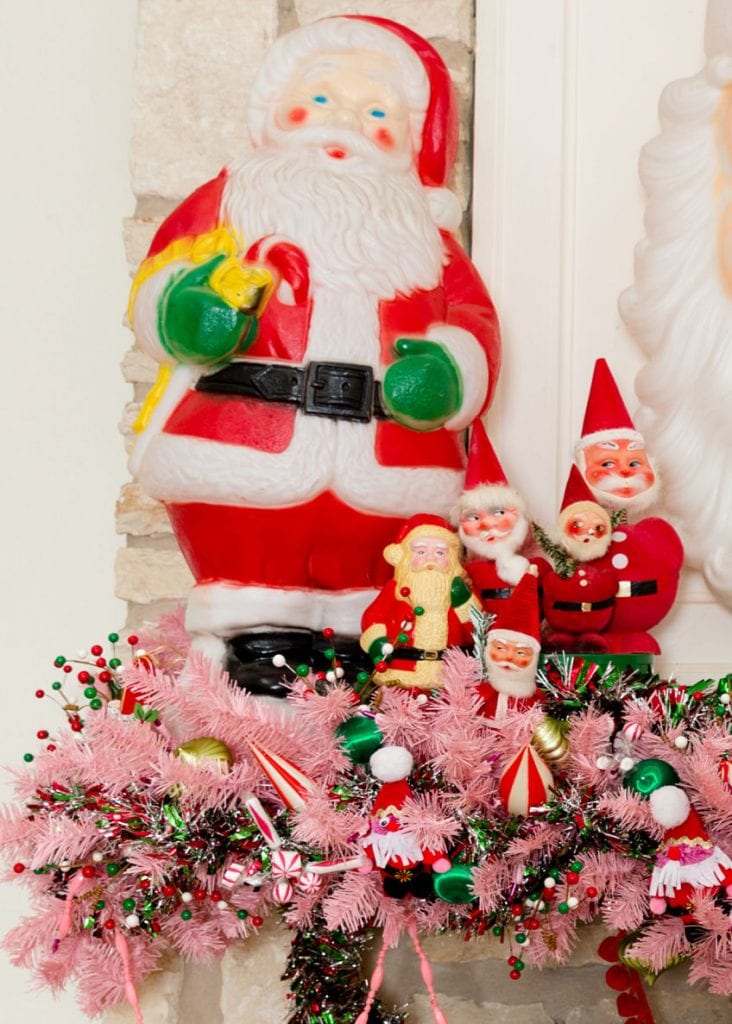 Just look at my little pompom Santa ornies popping out of the pink!  Because sometimes one vintage ornament is just not enough.  Luckily you can always DIY yourself a tree full.