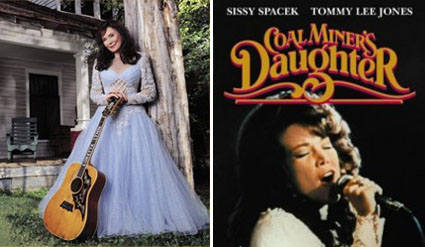 I awoke to a text yesterday from my friend Erin informing me that we were going to see Loretta Lynn in concert.  It was as if she knew I would say yes and already bought the ticket. Was it the fact that I have seen Coal Miners Daughter so many times I can recite lines or the fact that she and I had already been to see Dolly Parton together that clued her in? When I got the text the first thing that ran through my head was what western themed outfit could I wear? My cowboy boots are hot as a firecracker and all my western shirts are long sleeved so those were out. I know a cowboy hat! Not a normal cowboy hat, a wee little baby one cocked on the side of my head for a comedic effect. A cowgirl hat headband was born! I had to go to Michaels and Hobby Lobby yesterday for other craft supplies so why not hit the doll aisle while I was there. They have oodles of different doll hats so you can follow the instructions below and make yourself a headband hat out of cowboy hats, baseball caps or perhaps that little velvet sombrero someone brought you back from a trip to Mexico. Ole’

Make Your Own Cowgirl Hat Headband 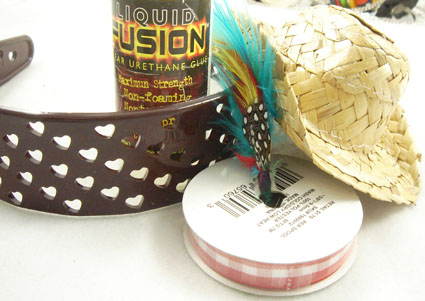 I have to give my sister Hope credit for the next step. As I sat there perplexed about how I was going to get good gluing contact between the straw hat and the headband she suggested filing the hole with foam board. I don’t know why I just so happened to have foam board in my studio, but I don’t know why there are a lot of things here and I was just thankful. I found a little piece of wood I have been drilling on lately that fit inside the hat hole where the dolls head would go perfectly and traced it onto the foam board. From there I used plain scissors to cut the circle out and a whole lot of glue to hold that sucker into the hat. 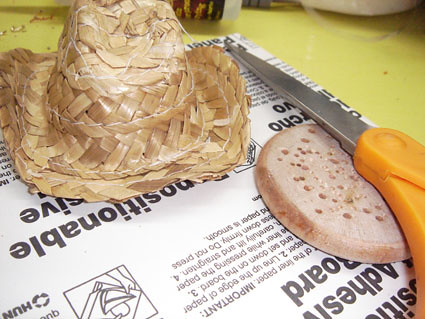 Clearly I was not going to wear a plain old straw hat, me leave something under accessorized – sacrilege. I scored some feathers at the craft store and already had spools of thin ribbon at the house. First I measured my length of ribbon. I opted for red and white check because it felt the most country to me. I put a strand of glue around the hat and tacked my ribbon into place. After the ribbon was down I just stuck my feather between the ribbon and the hat with a large dollop of glue. 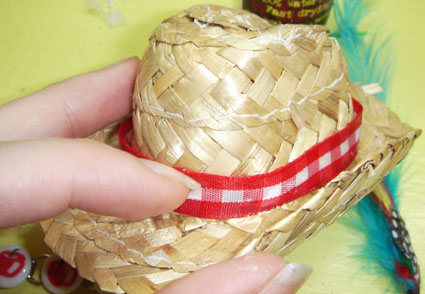 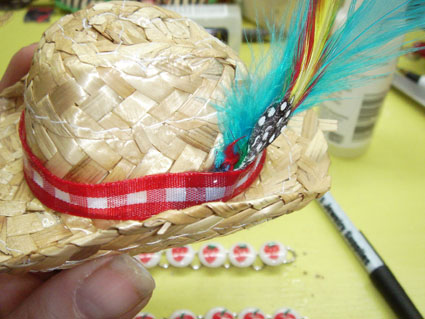 The next step is the trickiest part, gluing the hat to the headband. The key is a mother load of glue. I’m a firm believer that you can never have too much glue during these types of situations. The tricky part is making sure the hat, which is now slicker than a greased pig from the glue, does not skate all over your headband. You should put your headband on first, take a gander in the mirror and get an idea about where you want your hat to sit. Once you have made a life choice glue that baby down and set it up to dry. I put mine out in the garden hanging over a tomato cage in the sun. It was 100 degrees yesterday and I had like 3 hours until show time, I needed to help my glue drying time along. 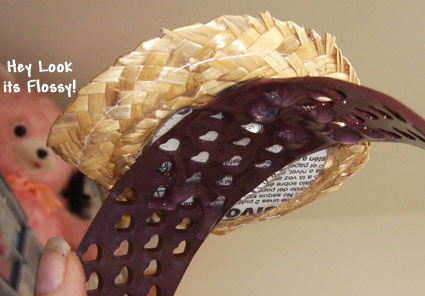 The next step is sometimes the hardest. Put on your new headband and make sure that you really have the inner strength to pull this bad boy off. It’s all fun and games when you are home alone in your studio making this, but your first step into a public place (mine was the 7-11 down the street) and the looks people will give you is where the line is drawn in the sand between the crafty girls and the crafty women. I was prepared and have worn way more obnoxious things in my time. Plus all night people complimented me on my hat and couldn’t believe that I made it myself. Needless to say at a Loretta Lynn concert I was surrounded by real life cowboy hats. On top of that I had forgotten that the Austin Biker rally was this weekend. I feel like I have a whole new inner strength wearing a tiny little, I’ll admit it – slightly redic cowboy hat in front of hundreds of tough guys on huge motorcycles. I only had one biker dude make a crack about me heading down to the Copacabana later, but since I am a Barry Manillow fan I just smiled and took it in stride. 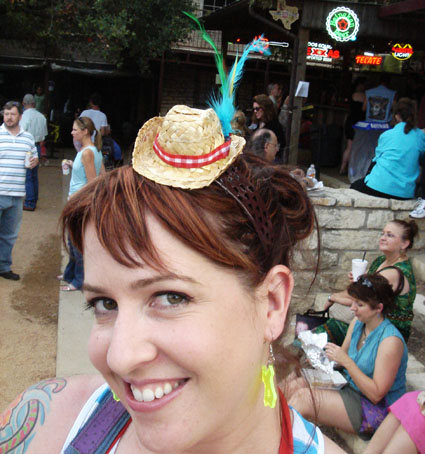 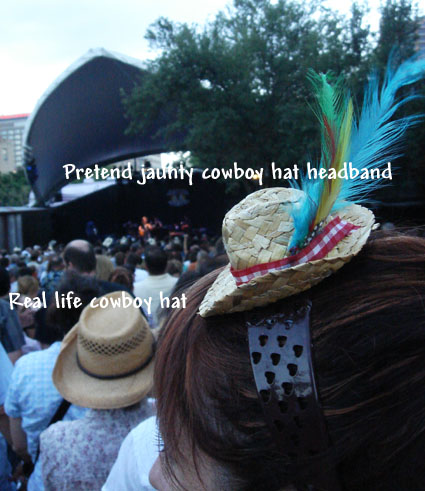 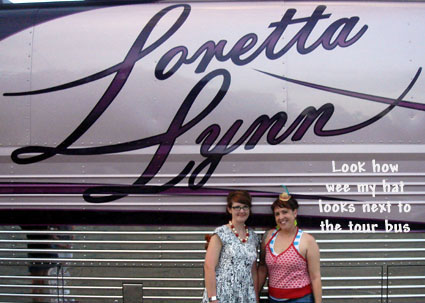 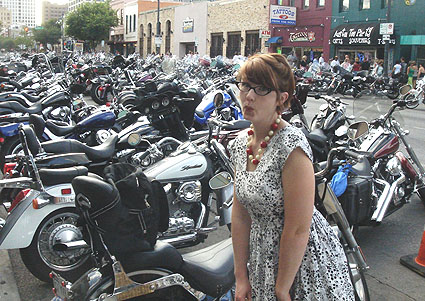 Beyond the hat the music and concert was amazing. We were outside at the amphitheatre at Stubbs BBQ which also means I got to have a chopped beef sandwich for dinner! I dusted off my First Ladies of Country Resin Bracelet (click here to learn how to make your own) because of course there is a picture of Loretta Lynn. Loretta was amazing and wore a full length lavender sequined gown, had her hair teased up and had a thicker accent than I do. She sang all the hits including “Fist City”, “Honky Tonk Girl”, “Coal Miners Daughter” and more. She was taking requests from the audience and bless her old as dirt heart sometimes she would forget the lyrics and the band would have to start singing for her to remember. It only happened a couple of times and it was hot and she was in long sleeves so I’ll forgive her. I think one of my favorite parts of the night was the Color Me Country coloring book they were selling. For just $5 how could I not buy one? It is pretty much the most amazing thing I have bought in a good long while. 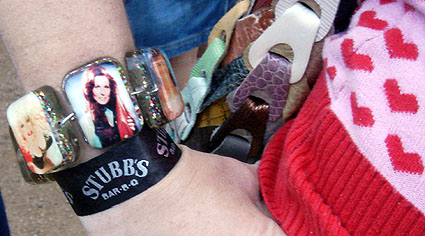 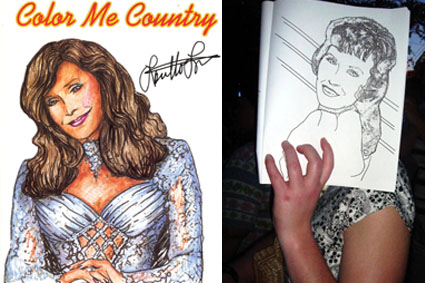 If you want more info on making your own adorned headband I have a couple of suggestions for you. You might remember the old cover of Naughty Secretary Club: The Working Girls Guide to Handmade Jewelry had a picture of the Quitting Time Headband. Yup there is a fun headband project in the new book! Also sometime on the DIY Network you might be able to catch an episode of Stylelicious called Putting it On where I show the girls how to make some wacky headbands with cupcake topper crowns and high heel shoes.

18 Responses to “How to Make Your Own Cowgirl Hat Headband!”